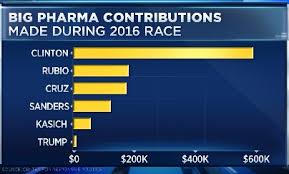 (NaturalNews) She likes to bill herself as a champion of the little people, the common folk, the unwashed masses. But unlike her chief opponent, Hillary Clinton is one of the most bought-and-paid-for presidential candidates we've had in a number of election cycles.

Vermont Sen. Bernie Sanders, who is challenging Clinton for the Democrat presidential nomination, can rightfully boast that he's not owned by entire industries the way the former U.S. senator and first lady is, and that is especially true of Big Pharma.

In fact, according to The Hill, the daily newspaper that covers Congress and the White House, Clinton is by far the largest recipient of drug money this election cycle.

As further reported by STAT, a national publication from Boston Globe Media Partners that launched last fall, though Clinton said during a recent interview she was proud to be an enemy of the drug companies, she is hypocritically taking huge sums of their money (by comparison, Sanders' campaign returned a $2,700 contribution from that rat fink Martin Shkreli, the now-indicted CEO of Turing Pharmaceuticals, the company that hiked prices for a life-saving drug by 4,000 percent overnight.

Hypocrite in a pantsuit

The Clinton campaign received far more money from the drug and medical device industries than any other presidential candidate in either party during the first six months of the campaign, according to figures compiled by the Center for Responsive Politics. She accepted $164,315 during that period.

That massive figure does not include third-quarter contributions, which were being filed with the Federal Election Commission at the time of the report. While the donors mostly represent individuals who are affiliated with Big Pharma, they include at least two senior executives of a company that recently imposed massive drug price increases on patients.