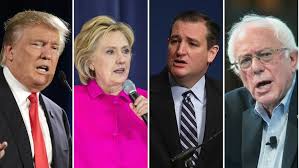 A large number of candidates play off against one another in the primaries. The media pay attention only to the Democrats and the Republicans, ignoring all the others, given that the system is devised so that they can never win.

The US primaries offer a depressing spectacle during which the main candidates do not seem to be aware that their reckless judgements and demagogic declarations will have consequences, both interior, and exterior if they should manage to become President.

Despite appearances, the Presidential function enjoys only limited power. Thus, it was obvious to everyone that President George W. Bush was incapable of governing, and that others did it for him. In just the same way, it is obvious that President Barack Obama is unable to inspire obedience in his own administration. For example, we can see men from the Pentagon waging a ferocious war against men from the CIA on the battlegrounds of Ukraine and Syria. In reality, the main power of the White House is not in commanding the armies, but in naming or confirming 14,000 senior civil servants – 6,000 of whom are nominated when the new President takes office. Beyond appearances, the Presidency is, therefore, the guarantee of the maintenance of power by the governing class – which is why it is the power structure, and not the People, who decide the election.

Let's remember that, according to the Constitution (article 2, section 1), the President of the United States is not elected by universal suffrage, as the ignorant media pretend, but only by the 538 governing representatives. The Constitution states no obligation for these governors to nominate electors who correspond to the desires expressed by their citizens during the preceding ballot. Thus, in 2000, the Supreme Court of the United States refused to invalidate the electors designated by the governor of Florida, even when there was doubt concerning the desires expressed by the electors of that state.

Let us also remember that the «primaries» are not organised by the political parties, as in Europe, but by the states – under the responsibility of the governors and each according to his own system. The primaries are designed so that, in fine, the major parties each present a candidate for the Presidential function who is compatible with the interests of the governors. They are therefore organised on the Soviet model of «democratic centralism» in order to eliminate any individual with an original thought, or simply anyone who may risk questioning the system, to the profit of a «consensual» personality. In the case where the participating citizens are unable to nominate a candidate, or particularly if they manage to nominate one who is incompatible with the system, the party Convention which follows will decide, if necessary, by overturning the citizens' vote.

The US primaries are therefore not a «democratic moment», but on the contrary, a process which, on the one hand, allows the citizens to express themselves, while on the other, directs them to give up their own interests and line up behind a candidacy which conforms to the system.