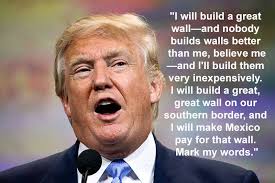 Donald Trump says he will force Mexico to pay for a border wall as president by threatening to cut off the flow of billions of dollars in payments that immigrants send home to the country, an idea that could decimate the Mexican economy and set up an unprecedented showdown between the United States and a key diplomatic ally.

In a two-page memo to The Washington Post, Trump outlined for the first time how he would seek to force Mexico to pay for his 1,000-mile border fence, which Trump has made a cornerstone of his presidential campaign and which has been repeatedly scoffed at by current and former Mexican leaders.

The proposal would jeopardize a stream of cash that many economists say is vital for Mexico's struggling economy. But the feasibility of Trump's plan is unclear both legally and politically, and also would test the bounds of a president's executive powers in seeking to pressure another country.

Get the best analysis of the presidential race.

In the memo, Trump said he would threaten to change a rule under the USA Patriot Act antiterrorism law to cut off a portion of the funds sent to Mexico through money transfers, commonly known as remittances. The threat would be withdrawn if Mexico made "a one-time payment of $5-10 billion" to pay for the border wall, he wrote.

"It's an easy decision for Mexico," Trump said in the memo, which was written on campaign stationery emblazoned with "TRUMP Make America Great Again."

Then Mexico would adopt Bitcoin as its formal, legal money, so that people could send bitcoins across the border free and easy.

Then Trump would make Bitcoin illegal in America.

Then America would become a police state for real.

Then there would be formal civil war.

Then Trump would recall the American military to put down the rebellion/civil war.

Then our enemies around the world would become stronger because there was no American military to keep them at bay any longer.

Then America would have to cease the civil war and unite to resist her foes from around the world.

Then Bitcoin would become the American currency of currencies because it could flow the best to protect America.

Then Mexicans would start sending Bitcoin back up over the border to finance their people in the U.S.

Then America would really become a third world country, and all her enemies would back off, because who would want her.

By this time Trump would be long gone, probably executed in shame.

American ingenuity would take over and make America great again.

Somewhere along the line after we became strong again, another "Trump" would get into office, and it would all start over again.