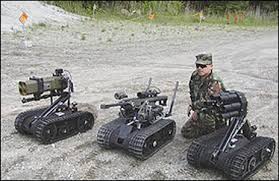 Washington (AFP) - Robotic systems and unmanned vehicles are playing an ever-growing role in the US military -- but don't expect to see Terminator-style droids striding across the battlefield just yet.

A top Pentagon official on Wednesday gave a tantalizing peek into several projects that not long ago were the stuff of science fiction, including missile-dodging satellites, self-flying F-16 fighters and robot naval fleets.

Though the Pentagon is not planning to build devices that can kill without human input, Deputy Secretary of Defense Robert Work hinted that could change if enemies with fewer qualms create such machines.

"We might be going up against a competitor that is more willing to delegate authority to machines than we are, and as that competition unfolds we will have to make decisions on how we best can compete," he said.

Work, who helps lead Pentagon efforts to ensure the US military keeps its technological edge, described several initiatives, including one dubbed "Loyal Wingman" that would see the Air Force convert an F-16 warplane into a semi-autonomous and unmanned fighter that flies alongside a

The US military has over the past 15 years invested heavily in unmanned drone technology, used to surveil vast parts of the Middle East and Africa and sometimes conduct deadly strikes -- though remote human operators decide when to fire.

Commercial tech firms like Google are rushing to develop driverless vehicles, but Work said it would take longer for the military to create autonomous trucks given the challenges of navigating off-road.

"When the roads become more dangerous we will go off road, and that type of navigation is extremely difficult," Work said.

The US military wants to build driverless convoys to protect against roadside bombs, a low-tech weapon that has killed hundreds of troops in Iraq and Afghanistan.

Science and technology leaders including British physicist Stephen Hawking fret that the development of weapons with a degree of autonomous decision-making could be feasible within years, not decades.

Earlier this year, they called for a ban on offensive autonomous weapons that are beyond meaningful human control, warning the world risked sliding into an artificial intelligence arms race and raising alarm over the risks of such weapons falling into the hands of extremists.