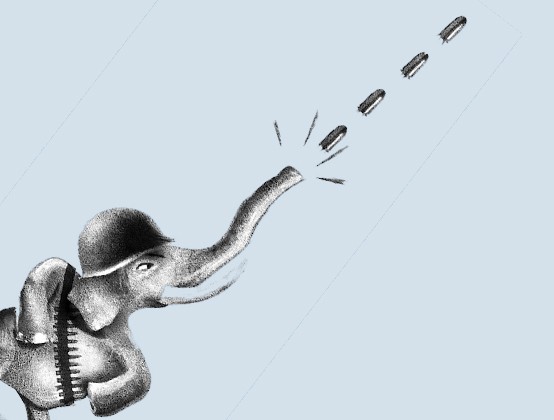 The rise of Donald Trump has led to predictions that the neoconservative dominance of Republican foreign policy is about to end, whether or not Trump wins. The Donald has challenged the perpetual military interventionism aspect of neocon-think without doing any damage to his campaign and, in the process, he has certainly noticed who the most strident voices being raised against him are.

Admittedly the prospect of a world blissfully free of neocons is appealing, but some observers have noted how the neoconservatives are chameleon like, blending in with whoever is controlling the levers of power and capable of moving from their original home in the Democratic Party over to the GOP—and then back again to the Democrats whenever it seems tactically advisable. Their eradication is far from a sure thing and one expects to see the neocon stalwarts Victoria Nuland and Robert Kagan at the top of any Hillary Clinton administration.

The effort to disparage Trump is to a considerable extent neocon driven, featuring the usual publications, as well as frequent television and radio appearances driven by Weekly Standard editor Bill Kristol's talking points. Recently the Washington Post, as part of its own unrelenting campaign to destroy the Trump candidacy, has been featuring numerous articles attacking the candidate from every conceivable perspective. An op-ed queried seven "Republicans" regarding their own views of the Trump phenomenon plus their advice regarding what might be done to stop him. Former Congressman Eric Cantor stated flatly that "I don't believe Donald Trump is a conservative" while Kristol called for mounting "an independent Republican candidacy in the general election." Danielle Pletka of the American Enterprise Institute said Trump "is no conservative and will do lasting damage to the conservative movement," a sentiment topped by Ari Fleischer's assertion that "Trump is not really a Republican."

This playing of word games is an effort to excommunicate individuals who do not fit into an acceptable template drawn by those who comprise the nation's political elite. Congressman Ron Paul suffered from such attacks labeling him a libertarian when he ran for president. Pat Buchanan had preceded him, described by the neoconservative crowd as an anti-Semite and fascist. In reality, both were attacked for not being internationally interventionist enough to be considered true conservatives, which actually tells one more about the critics than it does about the victims of the denigration.

In its current incarnation, the Republican Party leadership, in going along with the charade, is essentially yielding to the neoconservative view that willingness to assert American leadership through overseas wars was and still is a sine qua non when it comes to being considered a conservative.