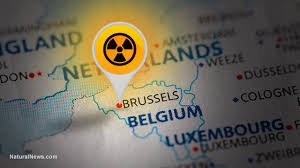 (NaturalNews) We've just learned from the Daily Mail that the ISIS terrorist bombers in Brussels planned to attack a nuclear power plant. The terrorists had been staking out the home of the nuke plant director, whom they planned to kidnap to gain access to the power plant.

"The Brussels terrorists were preparing an attack on a nuclear power plant and had recorded 12 hours of reconnaissance footage," reports the online paper. "Hours of film of the home of the Research and Development Director of the Belgian Nuclear Programme were discovered in an apartment in Brussels raided by anti-terrorist police following the attack in Paris."

What's the goal of all this? It's obvious: The terrorists hoped to cause a nuclear meltdown in Brussels and unleash a nuclear holocaust in the heart of the EU. And according to the politically correct delusional bureaucrats running governments and media outlets, this is all our fault because we did something to make the terrorists angry. (Yes, indeed, the terrorists are never responsible for their own actions... at least, according to the lunatic mainstream media.)

Thanks to the complete lack of border security in America -- due to deranged, insane politicians who desperately need more illegal voters to enter the country -- we also know that ISIS terrorists have already entered the USA and are likely planning the same sort of attacks here.

ISIS terror cells operate with full autonomy, making them almost impossible to find and interdict. Each independent cell decides on its own what targets and method to pursue, and they're all trained in the art and science of deploying high explosives, identifying structural weak points of buildings and bridges, and the art of social deception. They enter the USA and European countries under the guise of being "refugees" or "migrants," but once established in the target country, they begin gathering reconnaissance intel on their intended targets while amassing destructive devices to carry out their terrorism acts.

Meanwhile, totally delusional establishment bureaucrats in America steadfastly refuse to acknowledge that radical Islam even exists. The entire political left of the United States, for example, remains in a shocking state of denial over the rise of radical Islamist terrorism all across the world. They are truly blinded to the dangers of Jihad because of their delusional political leanings.

The 9/11 Attacks: Understanding Al-Qaeda and the Domestic Fall-Out from America's Secret War

The blood-soaked Taliban leaders taking control of Afghanistan whose histories...

Snyder: We're Rapidly Becoming A "1984 Society" & It's Only Going To Get Worse