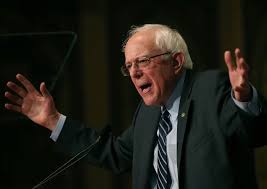 (NaturalNews) Whether or not you support presidential hopeful Bernie Sanders as your candidate of choice in the upcoming election, it's worth knowing his stance regarding alternative medicine.

In this regard, he seems to be by far the most open-minded of all the candidates left in the race – including both Republicans and Democrats.

Not only was Sanders one of the few in Washington to oppose the confirmation of drug industry insider Dr. Robert Califf as new head of the FDA, but he has also voiced support for alternative medicine and natural healing techniques in general, throughout his long career.

His comments regarding Califf's appointment reveal that Sanders is well aware of the strong-arm tactics employed by the big drug companies to exert control over the agency's regulation of the pharmaceutical industry:

"Dr. Califf's extensive ties to the pharmaceutical industry give me no reason to believe that he would make the FDA work for ordinary Americans, rather than just the CEOs of pharmaceutical companies."

If elected, one of Sanders' promises is to take on the pharmaceutical companies which unfairly hike drug prices.

"Instead of listening to the demands of the pharmaceutical industry and their 1,400 lobbyists, it is time that Congress started listening to the American people, who overwhelmingly believe that the cost of medication is too expensive. More than 70 percent of Americans believe drug costs are unreasonable and that drug companies are putting profits before people."

The promise to address exorbitant drug prices has also been a talking point in Hillary Clinton's campaign – but her words tend to ring a little hollow when one takes into account the fact that Clinton accepted $164,315 in contributions from the drug and medical industry during the first six months of her campaign – far more than any other candidate. And in politics, dollars often speak louder than words.

To be fair, Bernie Sanders has also accepted money from pharmaceutical companies – $8,346 in his campaign's first six months – but he has made it clear that he draws a line regarding Big Pharma support.

"We don't accept pharmaceutical PAC checks. Never have. Never will. But if you work as a drug researcher or hold another job and support Bernie, we welcome your help."

Sanders also rejected a $2,700 contribution from Martin Shkreli, the infamous Turing Pharmaceuticals CEO who raised the price of a cancer and AIDS drug to $750 per pill.

IN THE STATES: As DNC's "Build Back Better" Bus Tour Crisscrosses the South,

'America, You Are Being Robbed in the Dark of Night':