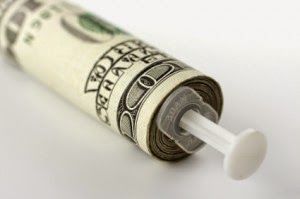 Comedian and actor Jim Carrey has been making a name for himself as an activist in recent years as he attacks the government for the influence big corporations have on it, and lately his attacks have been directed at Big Pharma's monetary leverage over policy and legislation.

In July 2015, Carrey went on a long Twitter rant that called out Governor Jerry Brown of California for being a "corporate fascist" after Brown approved legislation to make vaccines mandatory. Whatever your stance on vaccines might be, Carrey's position is interesting because he is both pro-vaccine but critical of governments forcing citizens to be vaccinated because the health risks haven't been fully evaluated and reported. Carrey's exact tweet that faced a lot of criticism before he elaborated read, "California Gov says yes to poisoning more children with mercury and aluminum in mandatory vaccines. This corporate fascist must be stopped."

Carrey's voice on this topic has become louder ever since his well-publicized relationship with anti-vaccine activist Jenny McCarthy, who believes her son's autism was caused by his exposure to vaccines. Though their relationship came to an end 6 years ago, Carrey has formed a strong stance on his beliefs with regards to vaccines. Though he is pro-vaccine, unlike McCarthy, he affirms his position as being anti-neurotoxins.

His stances on the matter are not without base, as thousands of cases of harm caused by vaccines have been reported. Carrey said, "There is no question that many of these vaccines have been among the greatest medical advancements in history. There is also no question that vaccines can and do injure people as the hundreds of millions of dollars awarded in vaccine court have proved." The court that Carrey is referring to is the Office of Special Masters of the U.S. Court of Federal Claims. This court was specifically created to assess cases that are reported in which people claim that vaccines have harmed them or loved ones.