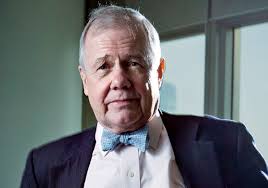 SINGAPORE ? Legendary investor Jim Rogers called for South Korea to put a greater focus on taking measures to help North Korea open and reform its economy rather than holding war games every year.

Rogers said that unification will become a breakthrough for Korea to overcome various economic challenges.

"All you have to do is to take down the demilitarized zone. Stop spending money on defense. You had those war games every year for 50 years," said Rogers, chairman of Rogers Holdings, in an exclusive interview with The Korea Times in his residence in Singapore.

He said Seoul needs to take steps to expedite the opening of North Korea, instead of further isolating the country.

Rogers expressed skepticism about the effect of President Park Geun-hye's decision to shut down the Gaesong Industrial Complex.

"I am a fan of President Park more than any other politicians but that was a mistake if you ask me. When she closed the complex, I was surprised. That was pretty negative for South Koreans," he said. "I know she has an election in April. It is one of the few times I thought she was making a mistake."

Describing himself as a big fan of Korea, the 73-year-old said that North Korean leader Kim Jong-un is trying to use nuclear brinkmanship to get leverage in negotiations with the U.S. and South Korea.

Revolutionary flying drone taxi hovers 150ft above Seoul river to show what it can do.

Revolutionary flying drone taxi hovers 150ft above Seoul river to show what it can do...