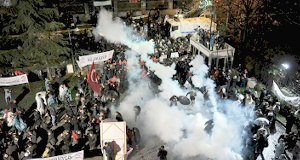 The Friday takeover of the Zaman, Turkey's largest newspaper, by the Turkish government appears to have been far from a total takeover, for while the group's Turkish office is now pumping out pro-government fluff pieces, the actual, private Zaman is going to continue to publish itself.

Unaffected by the Turkish offices being seized by police, the Zaman Almanya, the paper's Germany office, says it is still operating privately and will continue with the publication of the daily paper. They already have 14,300 subscribers within Germany, home to a large Turkish expat community.

The future of the English-language Zaman, Today's Zaman, remains unclear, as the site was last updated Saturday with harsh criticism of the government takeover of their corporation's main offices. The site has yet to be downed, however, despite talk that government officials intended to "purge" the archives of Zaman's websites of all pre-takeover content.