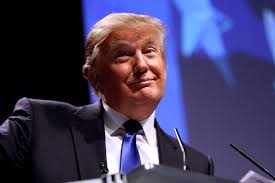 Thursday on CNN's Republican presidential debate, Donald Trump responded to former Mexican President Vicente Fox saying Trump's plan to get Mexico to pay for a border wall was not going to happen by saying "the wall just got 10 feet taller."

BLITZER: "Mr. Trump? Your campaign, as you well remember, began with the idea of building a wall along the southern border, it's about 315 miles southwest of where we are right now. You've said the Mexican government will pay for it."

BLITZER: "The spokesperson for the current president of Mexico says, that will never happen. The last two presidents of Mexico say, that will never happen. In fact, the former president of Mexico, Vicente fox, he said today, and I'm quoting him, he said, I'm not going to pay for that, quote, effing wall. So if you don't get an actual check from the Mexican government for $8 billion or $10 billion or $12 billion, whatever it will cost, how are you going to make them pay for the wall?"

TRUMP: "I will and the wall just got 10 feet taller, believe me. It just got 10 feet taller. I saw him make that — I saw him make the statement. I saw him use the word that he used. I can only tell you, if I would have used even half of that word, it would have been national scandal. This guy used a filthy, disgusting word on television and he should be ashamed of himself and he should apologize, OK?"