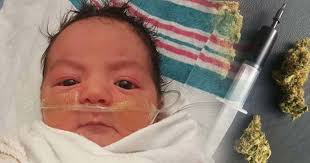 Aurora, CO — In December, Nicole and Ernie Nunez brought their beautiful baby girl, Amylea, into the world. However, when they brought her home, things quickly took a turn for the worst.

"About a day after we went home from delivery is when she had her first seizure," Nicole said. "She has a rare form of epilepsy. They don't know exactly the type."

For the past two months, the Nunez family has been desperately trying to treat their daughter's condition. Doctors in Albuquerque, New Mexico, where the family is from, were unable to find a cause and unable to treat young Amylea. So, the family has fled to Colorado.

Nicole stays at the hospital in Aurora while Ernie drives back and forth to take care of the couple's other children and to work.

At the Children's Hospital in Aurora, doctors continued the drug cocktail in an attempt to stop the horrible seizures, but these medications are not without side-effects.

"The medication she's on is hard for her liver, and so we're trying to do something different that's not so bad on her body," Ernie said, explaining why the couple has decided to use cannabis oil.

When the family heard about the seemingly miraculous effects of the cannabis oil known as Charlotte's Web, they became hopeful and set out to get it for their daughter.

Charlotte's Web is a strain of cannabis named after a young girl, Charlotte Figi, whose life it quite literally saved. Charlotte had her first seizure when she was three months old. Over the next few months, she had frequent seizures lasting two to four hours, and she was hospitalized repeatedly.

But her parents found a strain of cannabis that turned their daughter's suffering completely around. Since then, countless other children have had their lives saved by this amazing plant.

"I sat for a good three weeks fighting with the doctors and trying to talk them into giving me the okay," Nicole said. "I've been working with the case study team and the neurology team here at children's and I'm hopeful this will work."

This week, doctors finally agreed to let the cannabis oil into the hospital to treat Amylea.

"For us to get the approval for us to administer it while she in the NICU while she's a patient…it's kind of like a miracle," Nicole said. "Because they were completely against it saying, 'No you can't do it, you have to wait until she's an out-patient."

Even though the doctors gave the approval to treat Amylea with the oil, they won't administer it to her, so the family has done it themselves.