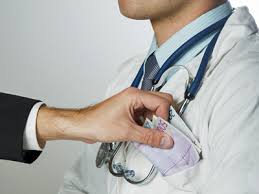 Pharmaceutical companies spend billions of dollars to influence, "educate," and entertain doctors around the world. According to ProPublica's "Dollars for Docs" website, which you can use to find out if your doctor accepts money from the drug industry, 1,630 companies have made payments to more than 681,000 doctors, totaling more than $3.5 billion.You can also find out if your doctor receives payments from Big Pharma by visiting OpenPaymentsData.CMS.gov. This site has tallied nearly $6.5 billion in payments since 2013.

Drug companies have long tried to influence doctors' prescribing habits by paying them for research activities, speaking and other "consulting," or offering gifts of free meals and travel. However, it hasn't always been possible to find out what gifts your own doctor might be accepting.

The Physician Payments Sunshine Act, which is part of the Affordable Care Act, went into effect in 2013. For the first time, the Act requires drug and medical device makers to collect and disclose any payments of more than $10 made to physicians and teaching hospitals.

The Centers for Medicare & Medicaid Services (CMS) is in charge of implementing the Sunshine Act, which it has done via its Open Payments Program. You can easily search the site to find out what (if any) payments your doctor has received, along with the nature of the payments.

Many Doctors Believe They're Not Affected by Drug Company Freebies

It is the rare physician who has not been given something by a drug company at some point during his or her career. Many physicians have regular contact with the drug industry and its representatives.

One study found physicians began interacting with pharmaceutical reps in medical school and continued at a rate of about four meetings a month.

A New England Journal of Medicine study also highlighted the prevalence of physician-industry relationships, noting that "most physicians (94 percent) reported some type of relationship with the pharmaceutical industry." This included:

Receiving food in the workplace (83 percent)

Despite these cozy relationships, many physicians believe they're immune to the effects of free food, free travel, and speaking gigs that essentially amount to free money.

They understand there's a conflict of interest there, but employ a number of psychological dynamics, including denials and rationalizations, to justify the relationship.

According to a study published in the Journal of General Internal Medicine, in order to resolve their state of cognitive dissonance, the physicians:

Avoided thinking about the conflict of interest

Denied responsibility for the problem

Reasoned that meetings with detailers were educational and benefited patients

It's possible for a physician to not be swayed by a drug representative's gifts of free food and travel, but it isn't likely. Many studies show that even well-intentioned physicians are often influenced by such gifts; if they weren't, the drug companies would have stopped this practice long ago.

According to one JAMA study:7

"Meetings with pharmaceutical representatives were associated with requests by physicians for adding the drugs to the hospital formulary and changes in prescribing practice.

Attending sponsored CME events and accepting funding for travel or lodging for educational symposia were associated with increased prescription rates of the sponsor's medication.

Attending presentations given by pharmaceutical representative speakers was also associated with nonrational prescribing."

Money clearly clouds objectivity. As written in the Journal of the Royal Society of Medicine:

"Several studies have shown that financial benefit will make doctors more likely to refer patients for tests, operations, or hospital admission, or to ask that drugs be stocked by a hospital pharmacy.

Caesarean section rates vary dramatically across the world and are higher when women are cared for by private practitioners who are paid for the operation.

Doctors in Britain performed screening examinations on older people when paid to do so — even though most argued that there was no evidence to support such screening.

Dentists in Britain carry out many unnecessary fillings because they are paid much more to fill teeth than to simply clean them. Doctors, in other words, do respond to financial incentives, and it would be surprising if they did not."

My point is not to call out any individual physician or researcher who is currently receiving income from the industry. In many cases, these individuals truly do not believe the relationship influences their medical advice, research or prescribing habits. And in some cases, the payouts may be justifiable.

I speak from experience because, in fact, I used to be a drug company lecturer. I was hired as a "rising star" shortly after I finished my residency training in 1985 and flew across the U.S. lecturing on estrogen replacement therapy — and receiving handsome checks from the drug companies for doing so.

I stopped more than 20 years ago when I realized the entire approach was a scam. However, there are tens of thousands of U.S. physicians and researchers who have replaced my lecturing role and are currently on Big Pharma's payroll. Now that these payments are being made public, this may begin to change.

Most physicians would rather their patients not know about any kickbacks they've received from the drug industry. But now that this has become public information, it may very well prompt some physicians to cut their ties to the industry. In 2012, research showed that accepting gifts from the pharmaceutical industry does have implications for the doctor-patient relationship, and "doing so can undermine trust and affect patients' intent to adhere to medical recommendations."

Not surprisingly, most people surveyed in one study said they would have less trust in their physician if they learned he or she accepted gifts worth more than $100 from the pharmaceutical industry, or went on industry-sponsored trips or sporting events.

One-quarter even said they would be less likely to take a prescribed medication "if their physician had recently accepted a gift in return for listening to a pharmaceutical representative's presentation about that drug."

Even Federal Health Officials Are Often on the Drug Industry's Payroll

It's bad enough that a private physician may be tempted to prescribe one treatment over another because of a financial tie to its maker. Worse still is when financial interests affect the voting behavior of committee members tasked with making broad policy and public health recommendations.

Research has shown, however, that conflict of interest is rampant among U.S. Food and Drug Administration (FDA) advisory committee members.

FDA advisory committees are created to help the agency make approval decisions on drugs, and the presence of external experts is supposed to ensure that decisions are unbiased and grounded in sound science. After carefully examining the financial relationships between 1,400 FDA committee members and drug makers, one study showed:

On average, 13 percent of the members in any given committee had financial interest in the company whose drug was up for a review by that committee.

Committee members with financial ties to the company sponsoring the drug under review voted in favor of approval 63 percent of the time, while members who did not have financial ties had a 52 percent chance of favoring approval

Committee members with financial ties to several competing drug firms did not, on average, show pro-industry bias in their voting behavior

In an Era of Bias, Conflict of Interest and Confusion: Take Control of Your Health

Virtually every measurable index indicates that despite the ever-increasing amounts of money invested, if you live in the U.S., your chance of achieving optimal health through the conventional medical system is getting progressively worse. As just one example, while the U.S. spends more than twice the amount on health care as other developed nations, we rank 49th in life expectancy worldwide — far lower than most other developed nations.

When it comes to your health, you simply cannot accept claims at their face value. Quite often — definitely too frequently for comfort — treatment recommendations are biased in favor of a specific drug simply because people making the decisions stand to profit from it.

Whatever your health problem might be, I strongly recommend digging below the surface using all the resources available to you; including your own common sense and reason, true independent experts' advice and others' experiences to determine what medical treatment or advice will be best for you.

Ultimately, you are responsible for your and your family's health, so be sure you feel completely comfortable with any related decisions you make. If you're facing a health challenge, choose health care practitioners who really understand health at a foundational level, and have extensive experience helping others (and don't be afraid to ask for references and seek corroboration).

I always advise taking control of your health as well, which you can easily do by reviewing my comprehensive nutrition plan that summarizes my 30 years of clinical experience and treating 25,000 patients.

I put this together so you can stay well and avoid having to rely on information that gives the perception of science when it is actually too heavily flawed or manipulated to benefit your health. Most of us live in free enough countries where we still have the ability to take back control of our health — we just need to grab the initiative.

And remember, if you want to find out whether your doctor is receiving payments from the drug industry, visit OpenPaymentsdata.cms.gov or Pro Publica's Dollars for Docs.