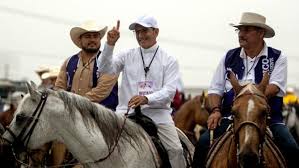 Mexico City (AFP) - When Pope Francis arrives in Mexico on Friday he will land in the most dangerous country for priests in Latin America, with dozens killed in the past decade.

The drug war that has killed tens of thousands of people in the past 10 years has also claimed the lives of at least 36 priests, targeted by criminal organizations, according to the Catholic Multimedia Center.

The latest victim was Father Erasmo Pliego de Jesus, whose burned body was found in November in Puebla, one of the most religious states in the world's second largest Roman Catholic country.

In April, Father Francisco Javier Gutierrez was found dead with a gunshot wound to the head in Guanajuato, another central state.

Alejandro Solalinde, a priest famous for his defense of migrants at a shelter in the southern state of Oaxaca, had to temporarily flee Mexico in 2012 after receiving death threats.

"We will kill you," said one of the blunt messages that Solalinde received.

Solalinde is now watched over by four bodyguards day and night while police guard his shelter.

In addition to the 36 priests assassinated since 2005, two more have disappeared, joining the macabre list of 26,000 missing people across the country.

Mexico is "the most dangerous country in Latin America to be a priest," ahead of other notoriously crime-riddled countries like Colombia, Brazil and Venezuela, according to the Catholic Multimedia Center.

In Mexico deaths were 50% higher for 8 months, then it starts Ivermectin…