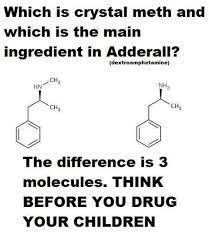 (NaturalNews) In a recent appearance on All In with Chris Hayes on MSNBC, drug abuse and addiction expert Carl Hart of Columbia University made a shocking claim: There isn't much difference between the demonized street drug methamphetamine (also known as meth or crystal meth) and the prescription drug Adderall.

It's not the first time Hart has raised this idea. In a 2014 report, Hart and co-authors Joanne Csete and Don Habibi, also from Columbia, examined in depth the effects of meth on the brain, concluding that there is no discernible difference in the effects of any amphetamine, whether prescription or illicit.

First, some definitions: Amphetamines are a class of chemicals that are used both medically and recreationally. The street drug known as "meth" may refer to either methamphetamine or dextroamphetamine. "Crystal meth" is a more specific form, methamphetamine hydrochloride.

The authors of the report note that both popular and scientific literature regularly make meth out to be much stronger and more addictive than other amphetamines.

"Such statements, however, are inconsistent with the empirical evidence," they wrote. " In carefully controlled laboratory studies of human research participants, [dextroamphetamine] and methamphetamine produce nearly identical physiological and behavioral effects.... They both increase blood pressure, pulse, euphoria, and desire to take the drug in a dose-dependent manner. Essentially, they are the same drug."

That means amphetamine drugs such as Adderall — prescribed to treat narcolepsy and "attention deficit hyperactivity disorder" (ADHD) in children as young as two — are in fact no different in action from meth. In fact, the active ingredients of Adderall are actually 75 percent dextroamphetamine salts; the other 25 percent are other amphetamines. That's why the drug is also used to enhance mental and athletic performance, and recreationally to produce a euphoric "high."

There's another FDA-approved drug that's even closer to crystal meth: the active ingredient of Desoxyn is methamphetamine hydrochloride — which is, literally, crystal meth. Desoxyn is approved for treatment of ADHD (even in the absence of any nervous system dysfunction) and as a weight-loss drug.

The absurdities of Drug War politics

That means that Adderall, Desoxyn and other prescription amphetamines likely carry the same risks as meth. According to Hart and colleagues, one of the main risks of long-term amphetamine use is toxicity to the brain cells that produce dopamine and other monoamine neurotransmitters. This appears to occur because large doses of amphetamine abnormally boost dopamine levels in the brain, leading to the production of cell- and DNA-destroying free radicals.

"This, in turn, could lead to persistent deficits in the functioning of dopamine-containing cells," the researchers wrote.

They note that recreational drug users may be somewhat insulated from this effect, because they tend to start with small doses and increase their usage over time. The worst effects in animal studies were seen in drug-naive animals given a large dose repeatedly.