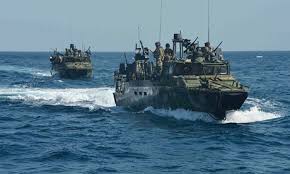 When news first broke of the detention of two U.S. ships in Iranian territorial waters, the U.S. media — aside from depicting it as an act of Iranian aggression — uncritically cited the U.S. government's explanation for what happened. One of the boats, we were told, experienced "mechanical failure" and thus "inadvertently drifted" into Iranian waters. On CBS News, Joe Biden told Charlie Rose, "One of the boats had engine failure, drifted into Iranian waters."

Provided their government script, U.S. media outlets repeatedly cited these phrases — "mechanical failure" and "inadvertently drifted" and "boat in distress" — like some sort of hypnotic mantra. Here's Eli Lake of Bloomberg News explaining yesterday why this was all Iran's fault:

Iran's handling of the situation violated international norms. … Two small U.S. sea craft transiting between Kuwait and Bahrain strayed into Iranian territorial waters because of a mechanical failure, according to the U.S. side. This means the boats were in distress.

Lake quoted John McCain as saying that "boats do not lose their sovereign immune status when they are in distress at sea." The night the news broke, Reuters quickly said the "boats may have inadvertently drifted into Iranian waters" and "another U.S. official said mechanical issues may have disabled one of the boats, leading to a situation in which both ships drifted inadvertently into Iranian waters."

The U.S. government itself now says this story was false. There was no engine failure, and the boats were never "in distress." Once the sailors were released, AP reported, "In Washington, a defense official said the Navy has ruled out engine or propulsion failure as the reason the boats entered Iranian waters."

Instead, said Defense Secretary Ashton Carter at a press conference this morning, the sailors "made a navigational error that mistakenly took them into Iranian territorial waters." He added that they "obviously had misnavigated" when, in the words of the New York Times, "they came within a few miles of Farsi Island, where Iran's Revolutionary Guards Corps has a naval base." The LA Times conveyed this new official explanation: "A sailor may have punched the wrong coordinates into the GPS and they wound up off course. Or the crew members may have taken a shortcut into Iranian waters as they headed for the refueling ship, officials said." The initial slogan "inadvertently drifted" — suggesting a disabled boat helplessly floating wherever the ocean takes it — has now been replaced in the script by "inadvertently strayed," meaning the boats were erroneously steered into Iranian waters without any intention to go there.

It is, of course, theoretically possible that this newest rendition of events is what happened. But there are multiple reasons to suspect otherwise. To begin with, U.S. sailors frequently travel between Bahrain and Kuwait, two key U.S. allies, the former of which hosts the Fifth Fleet headquarters; these were familiar waters.