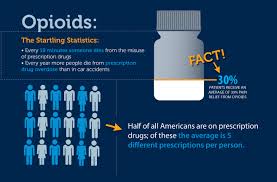 (NaturalNews) Big Pharma is proving once again that it values profits more than human lives, as drug manufacturers fight efforts to curb the overprescription of highly addictive and often deadly opioid drugs.

The makers of OxyContin, Vicodin and other opioid painkillers are pouring money into non-profit groups who are working against efforts to reform the way these drugs are prescribed.

Deaths from prescription opioid drug overdoses are on the increase – the National Institute on Drug Abuse reports that from "2001 to 2014 there was a 3.4-fold increase in the total number of deaths."

The over-prescription of opioid products has made the United States the center of the painkiller abuse epidemic. Americans consume about 81 percent of the global supply of oxycodone products (the active ingredient in OxyContin) and almost 100 percent of hydrocodone (the active ingredient used in brands such as Vicodin). More than 16,000 people die from opioid painkiller overdose every year.

The skyrocketing use of opioids in America is also closely linked to the rising heroin crisis, which reached new heights this year. Prescription opioids, which provide a high that is very similar to heroin, are often a gateway drug. As many as four out of five heroin users get started with opioid painkillers.

But the drug manufacturers seem to be unconcerned about these facts – or, rather, they are ignoring the facts and working against proposed reforms that could save thousands of lives each year and eliminate the misery of addiction for thousands more.

Concerns regarding the overprescription of opioid painkillers prompted the the Centers for Disease Control and Prevention to draft new voluntary prescription guidelines which were set to be finalized this month.

Their efforts were thwarted, however, by industry-backed organizations who complained that the reforms might limit patient access to drugs.

These organizations are thinly disguised mouthpieces for the drug manufacturing industry, but they managed to delay the CDC's January target date for a 30-day period of public comment and possible changes of the guidelines.

Anti-addiction advocates are concerned that the guidelines may be thrown out altogether due to industry pressure.

From the Los Angeles Daily News:

Under the proposed guidelines, doctors would prescribe these drugs only as a last choice for chronic pain, after non-opioid pain relievers, physical therapy and other options. The CDC also wants doctors to prescribe the smallest supply of the drugs possible, usually three days or less. And doctors would only continue prescribing the drugs if patients show significant improvement.