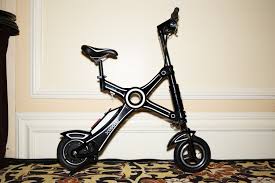 LAS VEGAS, NEVADA—The official first day of the CES is today. The doors open to the public, and the throngs swarm into the Las Vegas Convention Center and the surrounding expo halls to view all the latest tech products. We've been here for two days, so we've already seen quite a bit of awesome stuff. Collected here are the gadgets and gear we think are most deserving of your attention.

The biggest problem with the Xcooter, unsurprisingly, is the name. But once you get over that—it may take a few minutes—the folding electric scooter is worth a look.

Produced by Miami-based Smart-Rhino, the Xcooter is meant to be a last mile solution. It's not exactly a "scooter"—you don't push with your feet—but it offers a sizable range of 15 miles. It can hit a top speed of 17 mph. That's pretty quick considering how unsubstantial the Xcooter feels. But despite needing to strike a pose resembling that of a Downton Abbey character at dinner, it's no harder to ride than a bicycle.

Once you've arrived wherever you were going, you can fold up the aluminum alloy, 42-pound scooter in a few seconds and wheel it into a corner or a closet. The charger resembles what you get when you buy a Toshiba, plugs into a 110-volt outlet, and can fill the Samsung-produced battery in three to four hours.

The curious scooter's about to make its debut on the US market, and is now available for preorder for $1,499. After April 1, the price goes up to $1,799. So if you're looking for a small, zippy ride and don't mind the name Xcooter (or have a bumper stick to cover it up), act sooner rather than later.

PC Operating Temperatures: How Hot Is Too Hot?

Tesla Is "Paying In Advance" For Semiconductors And "Actively Considering" Buyin

Google Aims For Commercial Quantum Computer By 2029, What Would That Do To Bitcoin?