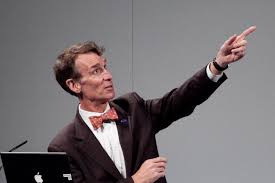 (NaturalNews) Bill Nye has just joined with Monsanto to push GMOs. He's basically recanted all of his former warnings about GMOs, even though for years he used to question -- and urged others to do the same -- what was in his food. His change of heart stems from a meeting he had with the folks at Monsanto.

Now, all has changed on the "teach the children" front, where Bill Nye the "Science Guy" has switched his stance, proclaiming his apparent new GMO love affair, exclaiming that "when you're in love, you want to tell the world." Whatever that means.

Everyone now has the responsibility to look at these "circus" endorsements and their front men and decide if they want to continue supporting anything people like this have to say in the future. Tell your kids. If you're a teacher, inform your students. If you're a school administrator, step up to the plate and have intelligent discussions with entire school systems about healthy food choices. Bill Nye is now the "Corporate Fraud Science Guy," nothing more than a talking head who now propagates GMOs.

Is Nye becoming the next Neil deGrasse Tyson, who thinks GMOs have been around forever and that you should just eat what's given to you and shut up? This may also remind you of Jon Entine, another shill who propagates GMO myths and has ties to Monsanto.

But back to the meeting Nye had with the folks at Monsanto. Looks like he came out of the depths of Monsanto's headquarters after talking with scientists there and has been crowned a champion! After his visit, Monsanto even tweeted a picture of Nye surrounded by others from the GMO-loving company, saying, "Thanks @BillNye for visit & advancing #science understanding. Look forward to more discussion!"

It's as simple as that. Corn and soy should cover each child's lunch tray at school. No child should have to multiple choice test their way to the working world without first eating pesticide-filled food from grade school through high school. Kids, just read the literature with pictures of the science shill, who propagates a myth he was once opposed to.

Little men in white lab coats and their cohorts mix the genes of bug-killing organisms in their vials and figure out how to kill weeds with toxins that start out growing inside the seeds. At Monsanto's research and development labs, scientists are hard at work producing cancer-causing foods that they believe could help the planet somehow.

Genetically mutated Frankenfood has been shown to kill baby lab rats in one month. How long will your good health last eating this Bill Nye-endorsed freak food? What's in your corn and soy? Do you need to ask, or has Bill Nye already taken care of all of that for you? Because last time we checked, Nye was asking questions. Now it seems the question he wants most answered is "How much will Monsanto continue to pay me?"

Bill Nye: "You cannot be certain what will happen to the ecosystem"

Understandably, Nye has received critical backlash in light of his new stance about GMOs. Once the admired man who warned of GMO dangers decades ago, he's now getting chummy with Monsanto, almost giddy. His post-Monsanto meeting declaration about being in love and wanting to tell the world has worried many who have questioned his intentions on various social media outlets.

On Reddit.com, for example, he declared the following:

I stand by my assertions that although you can know what happens to any individual species that you modify, you cannot be certain what will happen to the ecosystem. Also, we have a strange situation where we have malnourished fat people. It's not that we need more food. It's that we need to manage our food system better. So when corporations seek government funding for genetic modification of food sources, I stroke my chin.