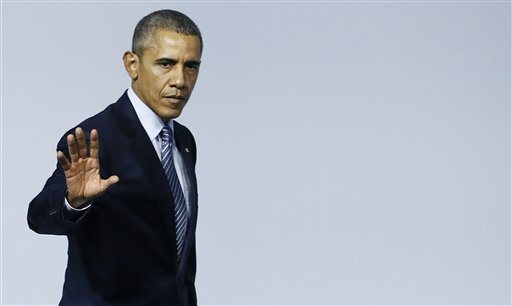 Obama was not expected to announce major policy changes for targeting the Islamic State group. Administration officials said the president's remarks would focus on how the terrorist threat has evolved and what steps the government is taking to keep Americans safe.

"I think what you're going to hear from him is a discussion about what government is doing to ensure all of our highest priority - the protection of the American people," Attorney General Loretta Lynch said in an interview with NBC's "Meet the Press."

"This horrific attack has people on edge and frightened. We've lost so many victims and people were wounded. People are concerned and we understand that," Lynch said.

She said Obama may ask Congress to "to review measures and take action" to safeguard national security, though she did not offer specifics. She suggested he might reiterate his call for stricter gun laws. "Dealing with guns is one way to handle the violent crime issues that we have in this country," Lynch said.

Senate Majority Leader Mitch McConnell, R-Ky., said Obama has an opportunity "tell the American people how he is willing to adapt to the threat and how he can better prepare our nation for a fight that will inevitably be passed on to his successor." McConnell called on Obama to outline plans for a ground force to dismantle the Islamic State group and detail what legal authorities are needed to defeat encrypted online communication that law enforcement says can be used to evade authorities.

DO YOU KNOW WHAT IS HAPPENING? MAKE SURE YOU'RE READY!