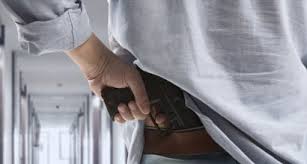 Rice University, one of the most prestigious private colleges in Texas, said on Monday it would opt out of a law due to go into effect next year that allows people with licenses for concealed handguns to bring them on campus.

University President David Leebron said in an email to students, faculty and staff of the Houston-based school that Rice would be a gun-free campus.

Leebron said the decision had been made after consultations with students, faculty, alumni and staff as well as university police and parents of students in which many said allowing firearms would make the school less safe and harm its reputation, he wrote. Rice has an enrollment of about 6,600.

Supporters of the so-called "campus carry" law enacted by the Republican-controlled Texas legislature have said that schools would be safer by having more guns in more places, with the firearms held by those who have gone through the requirements needed for a concealed handgun permit.

Public schools will be required to allow campus carry when it takes effect on Aug. 1, 2016, the 50th anniversary of one of the deadliest U.S. gun incidents on a campus when Charles Whitman killed 16 people by firing from a perch atop the University of Texas at Austin campus' clock tower.

"There is great concern that the presence of handguns, even if limited to licensed individuals age 21 or older, will lead to an increase in both accidental shootings and self-inflicted wounds," McRaven wrote to lawmakers this year.

Under the law, people 21 and older with a concealed handgun license can carry handguns in classrooms and other buildings at the University of Texas system, one of the nation's largest with an enrollment of more than 214,000.