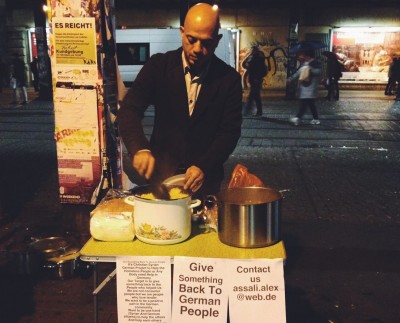 One refugee in Germany named Alex was spotted with a food table set up where he was feeding the homeless. Locals began to realize what he was doing and decided to help out by donating their time.

In one message posted to Facebook, one of the locals said (translated from German), "THATS ALEX ! A big shoutout to him this morning , this man impressed me deeply ! His story is not tangible for me and I can not begin to understand what he had to do but I'm so glad to have met him and to see what he does. He really lost everything , he had to leave behind because the IS people wanted to kill him he's walking from here to there and has left his old life back his family in Syria . And now he's in Germany and goes every Saturday . although he himself does not have much on the street and distributed food to the homeless . True to its motto "GIVE SOMETHING BACK TO THE GERMAN PEOPLE " . Yesterday I was able to go with him and help , I am so fascinated by this man ! Yeah So I have the feeling like , God bless him as he is a blessing for so many more people! THANK YOU ALEX!"

Refugees who have moved to the US have made similar efforts. It was reported this week that Seattle area's Muslim community regularly hosts charity events to help the homeless and serve them food, and their most recent charity effort was staffed by a number of Syrian refugees.

Nabil Al-Salkini, a 14-year old refugee who worked the food line told local reporters that he "wants people to know that the image of ISIS does not represent us."

His older brother Yazan Al-Salkini said, "Life stopped. We lost our home. It got bombed. Burned down. We couldn't go to school because civil war started. We were about to be persecuted or killed."