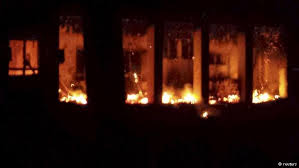 MSF responded that even if this were the truth of it, what had happened was a war crime: "These statements imply that Afghan and US forces working together decided to raze to the ground a fully functioning hospital with more than 180 staff and patients because they claim that members of the Taliban were present."

Two days before the second Kunduz hospital attack, Russian aircraft bombed targets in Syria. The US claimed irresponsible targeting had resulted in civilians being killed. Ambassador to the UN Samantha Power issued an urgent plea: "We call on Russia to immediately cease attacks on Syrian opposition and civilians."

The following day, Lieut Gen Bob Oto, the US Air Force's number two intelligence officer, contrasted US and Russian attitudes to civilian casualties. "We believe that if you inadvertently kill innocent men, woman and children, then there's a backlash from that." He urged the Russians to desist. A week earlier, on September 28th, air strikes by the US's most important regional ally, Saudi Arabia, had killed 131 people attending the wedding of a prominent member of the Shia Houthi organisation in a village near the Red Sea port of Mocha. This wasn't a once-off either. Yemen-based Human Rights Watch researcher Belkis Willie said: "I've documented several strikes since the beginning of the war on market places, because market places are going to be crowded. In one strike, you see 60-65 people killed all at once, all civilians."