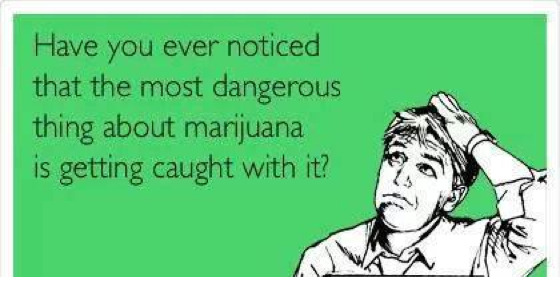 Newly-appointed acting Drug Enforcement Administration chief Chuck Rosenberg, who took over the position following previous DEA Administrator Michele Leonhart's resignation over a scandal in which subordinate DEA agents were caught participating in sex parties with prostitutes funded by Colombian drug cartels, recently clarified that he supports marijuana's controversial classification alongside hardcore drugs like heroin as a Schedule I narcotic with no medical use.

In an interview with Rosenberg, Fox News' James Rosen asked, "Two of the last three presidents of the United States have acknowledged having used marijuana… Isn't that itself – the fact that here we have two men who used marijuana, in varying degrees, and who then went on to become president of the United States – a kind of a prima facie argument that it is time to remove marijuana from Schedule I of the Controlled Substances Act?"

Rosenberg replied, "Yeah, I don't think so." He added, "Marijuana is dangerous. It certainly is not as dangerous as other Schedule I controlled substances; it's not as dangerous as heroin, clearly, but it's still dangerous. It's not good for you. I wouldn't want my children smoking it. I wouldn't recommend that anyone do it. So I don't frankly see a reason to remove it. We, by the way, support, and have supported, a lot of legitimate research on marijuana, fully behind that; I think it's great. If we come up with a medical use for it, that would be wonderful. But we haven't."

Rosen pushed back, "I've never seen two guys get thrown out of a bar because they started fist-fighting after smoking a joint. All right? But we've seen [that] every Friday and every Saturday night brings just such occasions as a result of the legal distribution of alcohol. Isn't there some common-sense disparity, or irony, or disconnect in that?"