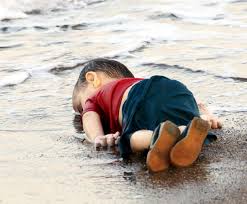 European governments have turned their backs on the worst humanitarian crisis of our time. The ray of hope in an otherwise desperate situation are the privately-financed teams of rescuers who are saving lives at sea

A heartbreaking photograph of a dead Syrian toddler whose lifeless body washed up on a beach in Turkey yesterday added a very real dimension to the so-called European 'migrant' crisis. 'Only by the grace of God is this not your child', said many Facebook users who shared the devastating image of this innocent child. 'The failure of the world in one photo', another commented.

His name was Aylan. He was just three years old when he drowned in the Mediterranean sea, along with his five year-old brother Galip. The boys were making the treacherous crossing from Bodrum in Turkey to the Greek island of Kos with their father. They were fleeing violence, oppression and starvation in Kobani, a town in Northern Syria which has long been the scene of fighting between ISIS militants and Kurdish forces. Aylan's boat capsized 30 minutes into the crossing, and the brothers (who were not wearing lifejackets) didn't stand a chance. Three other children and a woman were among the 12 who died. The image of Aylan's limp body went viral within hours, becoming the top trending picture on Twitter under the hashtag #KiyiyaVuranInsanlik (humanity washed ashore).

Last year, over 3000 people died crossing the Mediterranean in a desperate attempt to reach Europe. In 2015, those figures are set to double. The number had already passed 2500 by mid-summer, and increases daily. Most of the people fleeing their homes come from countries in Northern Africa and the Middle East: they are not economic 'migrants' but rather asylum seekers who have no choice to risk life and limb in search of survival elsewhere.

Hungary, Macedonia, Greece, Italy and The Czech Republic are the European countries struggling to cope with the sheer number of refugees who are desperate for asylum. Turkey, although not a member of the EU, is also under enormous strain as thousands of families flow into the country to find a way of reaching Europe. Germany, which handles around a quarter of all European asylum claims, has announced it will not turn away Syrian refugees, and Chancellor Merkel has criticized other member states for not doing enough to ease the collective burden.

'Do NOT come to the US': Biden's DHS Secretary warns Cubans and Haitians...