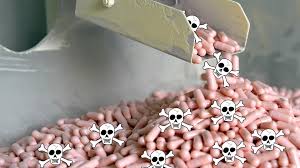 Waking up to the cynical truth about the corrupt, backscratching, revolving door relationships between the FDA (and other agencies) and the Big Pharma and Big Agra industries has been difficult to face, as the problem is so pervasive as to affect the lives of nearly everyone in this country, and beyond throughout the world.

As such, I felt the need to respond to Jon Rappoport's article, "A Message to Libertarians About the FDA," because it is an issue I have also thought about quite often.

Is it in the interest of a free society who desires limited government and maximum rights to have a tough watchdog who can protect people? After all, even the average citizen is likely familiar with the deadly mistakes and misdeeds of the food and drug industries…

People don't want dangerous pharmaceuticals being prescribed to them because proper testing wasn't done; people don't want their food contaminated with salmonella or e. Coli; many people don't want GMOs to be allowed at all, and damn sure want a label on food packages in order to know which foods contain them.

But if these are duties of the Food and Drug Administration, then the federal agency has failed over and over and over again, all while protecting those who've done wrong and enabling them to do bigger and better business.