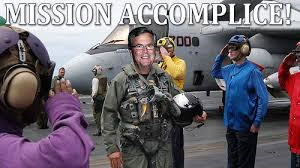 US intelligence was not "misled."  It was ordered by the real, de facto  president, Dick Cheney, to provide excuses for a war of aggression against Saddam Hussein's Iraq.

PM Tony Blair, forced British intelligence services to "sex up"  reports that Iraq had nuclear weapons; he purged the government and the venerable broadcaster BBC of journalists who failed to amplify Blair's lies.  Bush and Blair reportedly discussed painting a US Air Forceplane in UN colors and getting it to buzz Iraqi anti-aircraft sites in hope the Iraqis would fire on it.  Bush told Blair that after conquering Iraq, he intended to invade Iran, Syria, Libya and Pakistan.

In fact, Iraq had no "weapons of mass destruction," save some rusty barrels of mustard and nerve gas that had been supplied by the US and Britain for use against Iran.  I broke this story from Baghdad back in late 1990.

Tyler Drumheller, who died last week,  was the former chief of CIA's European division.  He was the highest-ranking intelligence officer to go public and accuse the Bush administration of hyping fabricated evidence to justify invading Iraq.