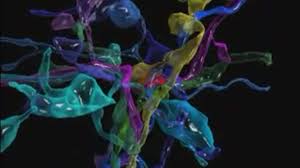 The human brain contains more synapses than there are galaxies in the observable universe (to put a number on it, there are perhaps 100 trillion synapses versus 100 billion galaxies), and now scientists can see them all – individually. A new imaging tool promises to open the door to all sorts of new insights about the brain and how it works. The tool can generate images at a nanoscale resolution, which is small enough to see all cellular objects and many of their sub-cellular components (so for the biology-literate, that's stuff like neurons and the synapses that permit them to fire, plus axons, dendrites, glia, mitochondria, blood vessel cells, and so on).

To demonstrate their new tool, researchers from the Boston University School of Medicine and Harvard University peered inside the brain of an adult mouse. They imaged a very small piece of a mouse's neocortex at a resolution that made individual synaptic vesicles visible (these are tiny spheres of less than 40 nm diameter that store neurotransmitters, or chemical signals, for release from a synapse into a "target" neuron). The specific area they imaged is involved in receiving sensory information from mouse whiskers, which are much more sensitive than human fingertips.