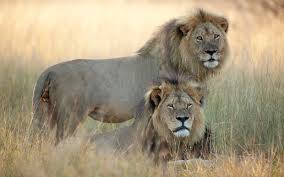 There's a lot going on in the world, but you wouldn't know it if you tuned in to the nightly news because according to the mainstream media, the only thing that happened anywhere last week is that a dentist shot a lion.

(Cecil the lion is the one on the right)

That's right folks, Walter killed Cecil and some folks - scratch that - a lot of folks are unhappy about it.

In fact, hundreds of protesters papered Dr. Palmer's office with subtle messages like "rot in hell" and "there's a deep cavity waiting for you."

As Reuters reports, Cecil's untimely demise has the potential to put a dent in a lucrative industry by leaving a bad taste in the mouths of big game hunters, who may now hesitate before participating in this "archaic bloodsport". Here's more:

Hunters longing to shoot big game in the African wild may choose a different target after public backlash against a Minnesota dentist who killed Zimbabwe's Cecil the lion just outside a national wildlife preserve.

African hunts are booked months in advance and pricey affairs, often costing $8,000 to $50,000, with approval needed from U.S. and U.N. agencies to bring back trophies such as the head of a lion to the United States.

"It has left a bad taste in their mouths," said James Jeffrey, a Houston-based international hunting agent with more than 12 years experience.

"They read all those books and it is people's dreams to go over there and do it. Some of these guys have worked their whole lives to do this one hunt," he said.

Eleven African countries issue lion hunting permits. Of them South Africa's hunting industry is the biggest, worth $675 million, according to the Professional Hunters Association.

Americans make up the bulk of non-African hunters, with 15,000 going to the continent on hunting safaris each year, according to John Jackson, president of Conservation Force, a lobby group that says regulated lion hunting helps protect the animal by giving reserve owners a financial incentive to deter poachers and cultivate stock.

Traveling With Pets: How to Find Pet-Friendly Places