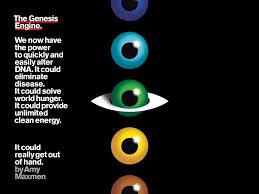 Spiny grass and scraggly pines creep amid the arts-and-crafts buildings of the Asilomar Conference Grounds, 100 acres of dune where California's Monterey Peninsula hammerheads into the Pacific. It's a rugged landscape, designed to inspire people to contemplate their evolving place on Earth. So it was natural that 140 scientists gathered here in 1975 for an unprecedented conference.

They were worried about what people called "recombinant DNA," the manipulation of the source code of life. It had been just 22 years since James Watson, Francis Crick, and Rosalind Franklin described what DNA was—deoxyribonucleic acid, four different structures called bases stuck to a backbone of sugar and phosphate, in sequences thousands of bases long. DNA is what genes are made of, and genes are the basis of heredity.

Preeminent genetic researchers like David Baltimore, then at MIT, went to Asilomar to grapple with the implications of being able to decrypt and reorder genes. It was a God-like power—to plug genes from one living thing into another. Used wisely, it had the potential to save millions of lives. But the scientists also knew their creations might slip out of their control. They wanted to consider what ought to be off-limits.

By 1975, other fields of science—like physics—were subject to broad restrictions. Hardly anyone was allowed to work on atomic bombs, say. But biology was different. Biologists still let the winding road of research guide their steps. On occasion, regulatory bodies had acted retrospectively—after Nuremberg, Tuskegee, and the human radiation experiments, external enforcement entities had told biologists they weren't allowed to do that bad thing again. Asilomar, though, was about establishing prospective guidelines, a remarkably open and forward-thinking move.

At the end of the meeting, Baltimore and four other molecular biologists stayed up all night writing a consensus statement. They laid out ways to isolate potentially dangerous experiments and determined that cloning or otherwise messing with dangerous pathogens should be off-limits. A few attendees fretted about the idea of modifications of the human "germ line"—changes that would be passed on from one generation to the next—but most thought that was so far off as to be unrealistic. Engineering microbes was hard enough. The rules the Asilomar scientists hoped biology would follow didn't look much further ahead than ideas and proposals already on their desks.

Earlier this year, Baltimore joined 17 other researchers for another California conference, this one at the Carneros Inn in Napa Valley. "It was a feeling of déjà vu," Baltimore says. There he was again, gathered with some of the smartest scientists on earth to talk about the implications of genome engineering.

The stakes, however, have changed. Everyone at the Napa meeting had access to a gene-editing technique called Crispr-Cas9. The first term is an acronym for "clustered regularly interspaced short palindromic repeats," a description of the genetic basis of the method; Cas9 is the name of a protein that makes it work. Technical details aside, Crispr-Cas9 makes it easy, cheap, and fast to move genes around—any genes, in any living thing, from bacteria to people. "These are monumental moments in the history of biomedical research," Baltimore says. "They don't happen every day."

Using the three-year-old technique, researchers have already reversed mutations that cause blindness, stopped cancer cells from multiplying, and made cells impervious to the virus that causes AIDS. Agronomists have rendered wheat invulnerable to killer fungi like powdery mildew, hinting at engineered staple crops that can feed a population of 9 billion on an ever-warmer planet. Bioengineers have used Crispr to alter the DNA of yeast so that it consumes plant matter and excretes ethanol, promising an end to reliance on petrochemicals. Startups devoted to Crispr have launched. International pharmaceutical and agricultural companies have spun up Crispr R&D. Two of the most powerful universities in the US are engaged in a vicious war over the basic patent. Depending on what kind of person you are, Crispr makes you see a gleaming world of the future, a Nobel medallion, or dollar signs.