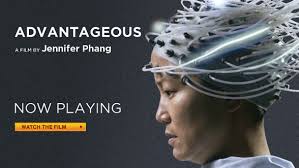 Director Jennifer Phang is an idealist, but she's also realistic. Spend any amount of time with her and it's apparent there is a constant internal tennis match in her mind between a cynicism nurtured by exposure to an unfair society and a stubborn hope that we can learn to be better—better to women, better to the environment, better to each other. It's a struggle we all face, but in her new film, Advantageous, it's Phang's optimistic side that takes match point.

The film is just Phang's latest attempt to be a part of the solution she so deeply hopes for, to raise our awareness of the issues she views as most pressing in our world. Now that Advantageous is done she's moving on to a science fiction love story involving a super collider and, she says, "an alternate dimension where you can find lost girls and fix your love problems." She's also working on a global warming related project called The Canopy, The Stream, The Sea. She describes it as having "that easy style of Before Midnight where you're relaxing in a beautiful place talking about problems," but it's about a climate scientist who has disappeared in the Borneo rainforest and the people who try to pull her back into civilization so she can continue her environmental efforts.

"It's basically an anti-cynicism movie," Phang says. "It's an attempt to re-engage moviegoers who've lost hope."

And thus we arrive at the battle between hope and cynicism in Advantageous, out now on Netflix. It tells the story of a woman named Gwen (Jacqueline Kim) living with her daughter in the near future. Gwen has a seemingly tidy existence as the spokeswoman for a cutting-edge biotech company, but unemployment is at catastrophic levels, and the most prized job candidates are either A) men or B) younger and more marketable women than single mother Gwen. So when she gets fired in an "it's not personal" flourish despite being the most qualified person to fill her role, Gwen must decide what she is willing to sacrifice to ensure her daughter's future.

So from its humble beginnings as a dystopic short film to its debut at the Sundance Film Festival, where it won the US Dramatic Special Jury Award for Collaborative Vision, here is the story of Advantageous.

Quentin Tarantino Jokes About Quitting While He's Ahead: 'Most Directors Have Horrible Last

The Pyramid of Power

Will Snow White be canceled next? Revamped ride at Disneyland sparks backlash over...