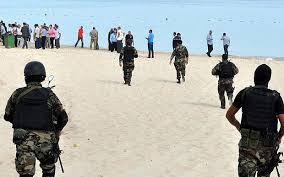 A gunman disguised as a holidaymaker has killed at least 37 people, including five Britons, in an attack on a popular tourist resort.

Terrified sunbathers ran for their lives as the attacker, dressed in shorts and hiding his Kalashnikov inside an umbrella, opened fire on the beach in the town of Sousse, Tunisia.

He then entered the Imperial Marhaba hotel through the swimming pool area, shooting people as he went and also threw an explosive, witnesses said.

Tourists ran from the sea and barricaded themselves in their hotel rooms after gunfire erupted, while medics used sunloungers to carry victims still in their swimming costumes.

"Don't Take Me for Granted"

Denmark To Scrap All Covid-19 Restrictions

What Is Really Going on Between Beijing And Washington in The South China Sea?

Romanians and Bulgarians Reject Covid Shots and Sell Off Surplus

Control: People will be tracked by heartbeat, the World Economic Forum's latest innovation

Visualizing US Military Spending Relative To The Rest Of The World