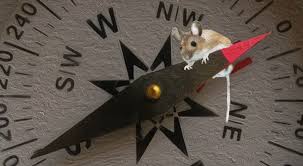 This story was originally published by Inside Science News Service.

(Inside Science) -- Quantum mechanics governs the quirky, counterintuitive way the world works at the small scales of atoms and subatomic particles. It might also be important for helping animals understand their place in their surroundings. New research suggests that wood mice, commonly found in Europe, have a built-in compass that exploits quantum processes, the first seen in a wild mammal.

According to a study in Scientific Reports published on April 29, wood mice placed in a container prefer to build their nests in the parts of the container closest to magnetic north and south. When researchers created an artificial magnetic field, the mice nested in line with the new north-south orientation. Scientists suspect that this compass sense comes from electrons dancing around in the mice's eyes.

This represents the first evidence found in a wild mammal for a magnetic sense that relies on effects at the quantum level. Previous research hinted at the presence of such a sense in lab mice, but that didn't necessarily indicate the same process would happen in wild animals.

When it comes to the magnetic sense, "we know next to nothing about mammals," said Thorsten Ritz, a biophysicist at the University of California, Irvine, who wasn't involved with the study, "so this is something new here."

From birds to bees to bacteria, many life forms can sense Earth's weak magnetic field, helping them navigate their environments. Among mammals, however, researchers had found magnetic senses only in mole rats, bats and similar creatures specialized for navigating in the dark.

"It makes sense that [those animals] use a magnetic compass to navigate," said Pascal Malkemper, a zoologist at Germany's University of Duisburg-Essen and the study's lead author. But it was an open question whether or not mammals that live in the light also had this ability, leading Malkemper to test an everyday European furball:Apodemus sylvaticus, the wood mouse.

Episode 402 – Your Guide to The Great Convergence