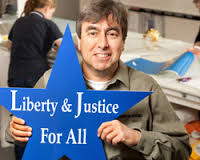 Gay people were denied the right to go into a place of their choosing and congregate with other like-minded individuals. That was wrong, and that people had to suffer at the hands of jackbooted thugs in police uniforms in order to assert that most basic of rights is scandalous. All the more so, because police now have so much more power and weaponry than they did then. Today's unwanted groups stand almost no chance to assert their rights in the same manner.

Unfortunately, the memory of what Stonewall was will not be much honored this weekend, as Pride celebrations throughout the globe supposedly commemorate it. Pride has turned into a celebration, not of the victory of an unwanted group over the powers that be that commanded them not to exist, but of excess. Millions of teenagers, young adults and adults who refuse to grow up, will descend on major cities to do drugs, drink and be sexually promiscuous, as today's gay leaders promote the "freedom" that this excessive display supposedly represents.

Speaking to the people who arrived in San Francisco's Castro neighborhood in the seventies to enjoy this "freedom," it is exactly these things which ruined, not uplifted their lives, as they struggled to piece back together an identity which had been robbed from them in their early lives by a society that told them early and often that they could be anything, but they could not be gay or lesbian.