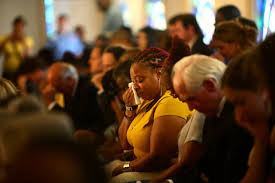 Maybe it was white rage that provoked a young man to kill nine innocent worshipers as they prayed. Maybe it was mental illness or some other twisted motivation. The one thing about which there can be no debate is that he had a gun.

The gun is what ties the unspeakable atrocity in Charleston, S.C., to the long and apparently never-ending list of mass shootings in this country. We know them by their place names—Newtown, Aurora, Tucson, Virginia Tech, Columbine, Navy Yard. They rivet the nation's attention for days or weeks—then they fade, and we do nothing. Perhaps this time will be different. I want to be hopeful, but I'm not optimistic.

The man who allegedly made a killing ground of historic Emanuel African Methodist Episcopal Church was identified as Dylann Storm Roof, 21, and described as a white supremacist. Charleston officials said from the beginning that this horror appeared to be a hate crime. A photo on Roof's Facebook page shows him wearing a jacket with patches depicting the flags of apartheid-era South Africa and Rhodesia.

The target was one of the nation's oldest and most storied African-American houses of worship, known by Charlestonians as "Mother Emanuel." The congregation was established in 1816 by free men and women of color. One of the founding members was Denmark Vesey, who in 1822 organized what would have been the biggest slave revolt in the nation's history. The plot was discovered, Vesey was executed, and vengeful whites burned the original church building to the ground.

The church was rebuilt, but parishioners had to start meeting secretly in 1834, when all black churches in the state were outlawed, until after the Civil War. The present church building, with its Gothic-style windows and its great soaring steeple, dates to 1891. Like other prominent black churches across the South, Mother Emanuel played a role as an organizational hub during the long struggle for civil rights. Booker T. Washington spoke there in 1909; the Rev. Martin Luther King Jr. visited in 1962.

Among the victims of Wednesday night's carnage was Mother Emanuel's pastor, the Rev. Clementa Pinckney, a theological and political prodigy who began preaching at 13 and won election to the South Carolina House of Representatives at 23. After moving up to the state Senate, Pinckney became the most visible champion of a bill to require police officers to wear body cameras. He was eloquent, charismatic and effective. Now he is gone.

Where Are the Autopsies of People Dying Post COVID Vaccine?

FUNERAL DIRECTOR, I'M LOOKING AFTER THE TERRIBLE MISTAKE, MOST DEATHS ARE VACCINATED