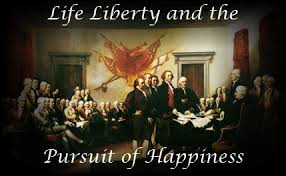 Unfortunately, Thomas Jefferson himself never explained his use of the phrase "pursuit of happiness" in the Declaration of Independence. However, he was almost certainly influenced by George Mason's Virginia Declaration of Rights (adopted June 12, 1776), which referred to "the enjoyment of life and liberty, with the means of acquiring and possessing property, and pursuing and obtaining happiness and safety."

I don't know whether that is true. George H. Smith, an authority on such matters, is skeptical. Jefferson himself, who was accused of plagiarism in his lifetime, said, "I know only that I turned to neither book nor pamphlet while writing" the Declaration; he sought, he said, only to achieve "an expression of the American mind." In other words, the ideas were thick in the air of his time. That Jefferson never explained why he chose the pursuit of happiness over property may indicate that he thought the choice was too obvious to require explanation.

Smith offers an entirely plausible and satisfying explanation for Jefferson's omission of property:

Aside from the fact (one often overlooked) that Jefferson wrote "among these" when referring to the inalienable rights of life, liberty, and the pursuit of happiness — thereby indicating that his list was not exhaustive — I point out that to have mentioned "property" as an inalienable right would have proved confusing to eighteenth-century readers.