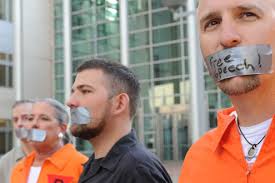 In Granby, Que., a town with about 60,000 residents situated 80 kilometres east of Montreal, it was already illegal to insult local government employees. Monday however, the town council strengthened that bylaw to include online insults as well.

The move came after town officials discovered a Facebook page critical of town police, called Les policiers zélé de Granby, (The Zealous Police of Granby) which has over 7000 likes.

Deputy Mayor Robert Riel conflated insults with threats when he voiced his support for the law.

"In my opinion, if I threaten you via my keyboard, it's as though I am making that threat right in front of you," Riel said. "For me, it's the same thing."

Obviously, the measure is a gross violation of free-speech and freedom of expression.