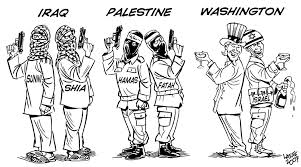 While the Israel lobby is blanketing the US media with propaganda to the effect that Iran cannot be trusted to adhere to the terms of any agreement limiting its nuclear research and development, back in Tel Aviv Bibi and his government know better. Ha'aretz has the story:

"Prime Minister Benjamin Netanyahu said at a recent meeting of the security cabinet that if a comprehensive nuclear agreement between Iran and the six world powers is indeed signed by the June 30 deadline, the greatest concern is that Tehran will fully implement it without violations, two senior Israeli officials said."

The problem for the Israelis isn't that the Iranians can't be trusted to keep the agreement. Quite the opposite:

"According to the two senior officials, Netanyahu said during the meeting that he feared that the 'Iranians will keep to every letter in the agreement if indeed one is signed at the end of June.'

"One official said: 'Netanyahu said at the meeting that it would be impossible to catch the Iranians cheating simply because they will not break the agreement.'"