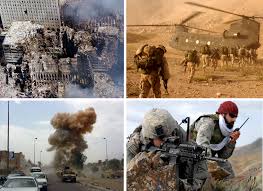 They have occurred because of faulty strategies and operations, which in turn have multiple roots that can be explored and identified. These results are outright failures. Current U.S. activities in Yemen and Ukraine suggest that these faults continue.

General Bolger has written a 500-page book. See this interview for some remarks of his that I quote.

"I am a United States Army General, and I lost the Global War on Terrorism.

"It's like Alcoholics Anonymous. Step one is admitting you have a problem. Well, I have a problem. So do my peers. And thanks to our problem, now all of America has a problem. To wit: two lost campaigns and a war gone awry.

"What I saw almost immediately was trouble figuring out who the enemy was. We knew within a day or two of the 9/11 attacks that it was al-Qaida, a terrorist network that had a headquarters element, if you would call it that, or a chairman of the board in Osama bin Laden. And they were operating out of Afghanistan.