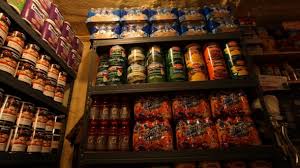 After two months of eating nothing but MREs, I began to get sick of them and started losing weight. Many of my fellow Marines experienced the same thing. We started to barter batteries for food that the ANA ate. They had a cook and bought bread every morning from the Bazaar. They had chickens for eggs and meat, and occasionally they had a goat. Eventually we bought 12 chickens for eggs and even began milking a goat. We would buy rice, beans, fruit, and veggies from the Bazaar and have my interpreter cook. It got to the point that the battalion was actually giving us money to buy food with. We found out later that some of the smaller units in remote locations had been doing this the whole time. Many Special Forces units will bring cash, as it is lighter than food, and just buy what they need along the way. This also cuts down on the trash you produce that, if left around, can let the enemy know vital details about your unit, such as size, location, country of origin, and how well supplied you are. In TETOWANKI, we might not have the luxury or being able to purchase food in a market, but if you are moving through an area and trying not to be noticed, you need to be careful to bury all trash. Another thing to consider is that if no one in the area is eating MRE's and some trash is found, it will tell potential threats that you are a mobile and maybe para military force. If they discovered food the locals were consuming, there is a good chance it will go unnoticed or without concern.

Morale is another factor to consider, when deciding what kind of food to store. I noticed a considerable increase in morale among my guys, just from getting a few fresh eggs.