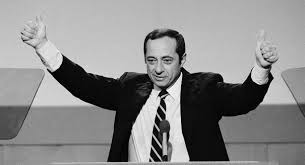 Ever-eloquent Mario Cuomo, a son of Queens who rode his rhetorical gifts to three terms as New York governor and tantalized Democrats by flirting with a run for President, died Thursday. He was 82.

Cuomo passed away at 5:15 p.m. of heart failure, surrounded by family in his Manhattan apartment as his son, Gov. Andrew Cuomo, was in Buffalo delivering his second inaugural address of the day.

Mario Cuomo was too ill to attend his son's first inaugural speech Thursday, delivered in Lower Manhattan just after noon.

"He couldn't be here physically today ... but my father is in this room," Andrew Cuomo said.

"He's in the heart and mind of every person who is here. His inspiration and his legacy and his spirit is what has brought this day to this point."

As governor, Mario Cuomo wrestled with two recessions and presided over a massive expansion of the state prison system. An unwavering liberal, he bucked the political winds by wielding his veto pen year after year to block the restoration of the state death penalty.