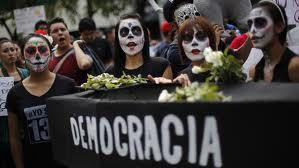 The enormous unrest that has erupted in recent days is, therefore, not only about criminality and violence but also social power and democratic politics. And what is at stake in today's battle for Mexico is not just the future of peace and prosperity for those living south of the Rio Grande but also democracy and justice north of the border.

Before taking office Dec. 1, 2012, Peña Nieto penned an op-ed for The Washington Post in which he tried to assuage concerns about his intimate connections with the most corrupt and backward old guard of the authoritarian Institutional Revolutionary Party, which ruled the country from 1929 until 2000. He encouraged observers to forget about the party's past and instead look at its "plan to open Mexico's energy sector to national and foreign private investment."

Writing on the eve of his first meeting with President Barack Obama in Washington, Peña Nieto claimed that such reforms would "contribute to guaranteeing North American energy independence," since "Mexico holds the fifth-largest shale gas reserve in the world, in addition to large deep-water oil reserves and a tremendous potential in renewable energy."

Obama, the U.S. military and Congress eagerly accepted Peña Nieto's Faustian bargain. They would blindly support his presidency in exchange for quick action on energy reform.