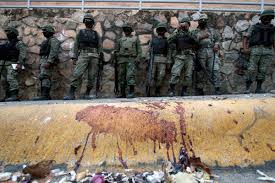 MEXICO CITY ? Torture and ill-treatment by the police and armed forces in Mexico are out of control, with a 600 percent rise in reported cases in the past decade, according to an investigation by Amnesty International.

Miscarriages of justice are rife in Mexico, where allegations of torture ? used to obtain forced confessions ?are rarely investigated to international standards, if at all. In some states, recurrent claims of torture are written off by authorities as a legal tactic used by guilty detainees, rather than investigated as evidence of systemic abuse.

Despite laws introduced in recent years to combat such practices, authorities at the highest levels have continued to turn a blind eye.

"There is a chain of collusion which tolerates torture and impunity," said Rupert Knox, co-author of the report.