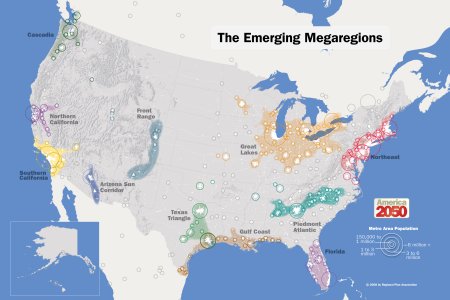 The "Hunger Games" nightmare scenario presently being implemented and it is called America 2050.

The plan is called America 2050 and the concept is based upon the creation of megacities. In order for the megacities concept, which is well underway, to come to fruition, Americansuburbs and rural areas must be completely depopulated. This process is underway and the Obama administration is accelerating the process.

This will come as a shock to many reading this article because they did not learn of these events from FOX or CNN. However, in actuality, the process of moving the United States towards a complete Agenda 21 style of total urbanization has already commenced and it began nearly 20 years ago. In the case of total urbanization, the United States is in the process of dividing the country into 11 large densely populated urban centers. The concept, which will be the subject of a future investigation, will explore this "end-game" strategy ofthe globalists which will depopulate the America's suburbs and rural areas. The concept is called megacities and the framework was laid in 1994, when the United States became official participants in the North American Free Trade Agreement (NAFTA), which was a 'liberalized' trade agreement between Canada, the U.S. and Mexico. Under NAFTA, farmers' income in all three countries has plummeted and millions of small farmers have lost their land, while agribusiness corporations (i.e. large government subsidized corporate farms) have reaped huge profits. Subsequently, NAFTA has had three dramatic effects on farmers in North America and all three effects further the cause dense urbanization as outlined in Agenda 21 documents. More at URL

My 7 Worst Gardening Mistakes and What I Learned From Them

My Secret to Perfect Summer Germination!