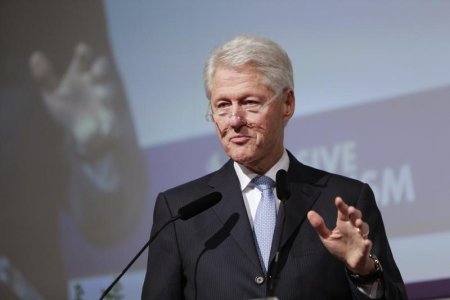 Clinton and officials from his administration have expressed similar sentiments both before and after the Sept. 11 attacks that killed more than 3,000 people but the recording appears to have attracted attention because he was speaking less than 36 hours before al Qaeda hijackers would board four airliners for attacks on the World Trade Center and Pentagon.

On the tape Clinton said he declined to pursue one opportunity to kill bin Laden in Afghanistan because it would have risked killing hundreds of civilians.

"And I'm just saying, you know, if I were Osama bin Laden -he's a very smart guy. I spent a lot of time thinking about him. And I nearly got him once," Clinton can be heard saying as people in the audience laugh.

"I nearly got him," Clinton continues. "And I could have killed him but I would have had to destroy a little town called Kandahar in Afghanistan and killed 300 innocent women and children and then I would have been no better than him. And so I didn't do it."

The recording was made with Clinton's knowledge by Michael Kroger, the former head of Australia's Liberal Party, at a speaking engagement in Melbourne on Sept. 10, 2001, Kroger told Australia's Sky News, which broadcast the 30-second excerpt.