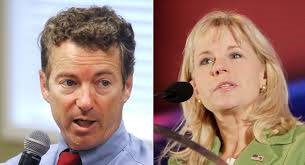 Excellent interview. Scott Horton is sharp as a razor. He's not a fan of Rand, or is he? Horton delivers much deserved criticism of Rand. But not like you may think.

WOODS: Scott, I know you are not a fan of Rand Paul, but I wonder if you were pleasantly surprised by the fact that he was willing in this case to say, I just don't see how this could possibly be considered Obama's fault. None of it would have happened if it hadn't been for George W. Bush. Now, he has bought into the surge worked stuff, and his comments weren't
perfect, but they are more than anybody else in the GOP these days is saying.
HORTON: Yeah, well, and you notice how they didn't really fight with him about it. He was outright saying, hey, look, Obama's been more or less, he wasn't careful, but [Rand] basically accused Obama of backing ISIS in Syria, and Candy Crowley pushed back a little bit out of her ignorance, but you notice he didn't get in kinds of trouble politically for this all week, and the answer is because it's true! John McCain was over there posing on the porch with the Northern Storm Brigade, who were veterans of al Qaeda in Iraq. Obama and McCain, both the entire Republican and Democratic establishments, they're all guilty of treason up to their eyeballs,
and have nothing to say to what Rand Paul said except silence.