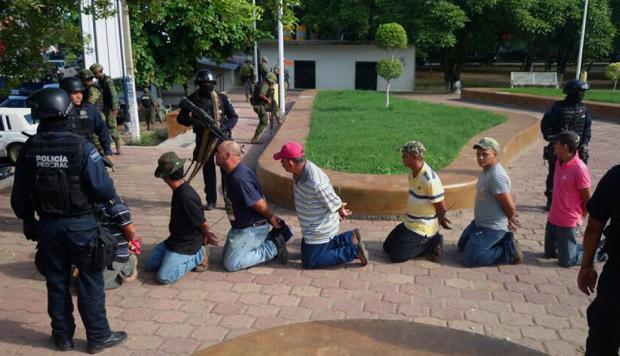 Mireles was detained in the Pacific coastal port city of Lazar Cardenas after entering a nearby town with more than 100 armed supporters, officials said.

A medical doctor by training, the tall Mireles, who sports a thick moustache and usually wears a cowboy hat, co-founded the group and was for months it's chief spokesman and its most visible personality.

Mireles was arrested with "weapons of exclusive military use," the Michoacan state government said via Twitter.

Along with Mireles more than 100 armed men who claimed to be self-defense force members were also arrested, an army source told AFP, speaking on condition of anonymity.

Michoacan, on Mexico's Pacific coast, is a key trafficking area in the drug trade to the United States.

Farmers and other civilians in the state took up arms in February 2013 claiming that the local police was too incompetent or corrupt to protect them from local criminal gangs, especially the cult-like Knights Templar drug cartel.