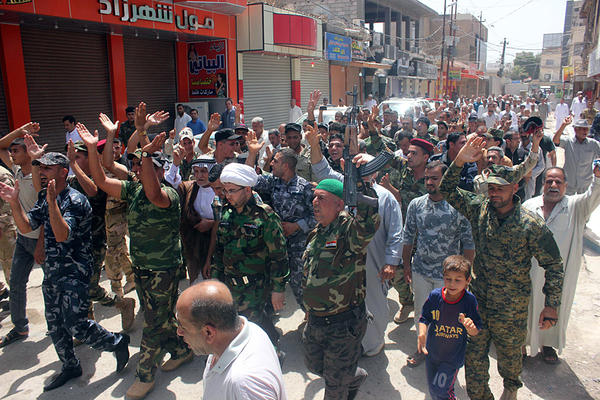 There has been a lot of writing about Iraq's crisis, much of it awful. This is an attempt to shout out some people and pieces that can help you get behind the headlines.

Let's start with Marc Lynch, the George Washington University political science professor who writes at the Washington Post's Monkey Cage. Today, he points out that helping Iraq's Nouri al-Maliki fight the Sunni Arab uprising against him would in effect be fighting on the side of Bashar al-Assad. Should the United States actually intervene militarily in support of the Iraqi government, it will also find itself on the opposite side of many of the Arab networks that support the Syrian uprising," he writes.

That's not because they support the Islamic State of Iraq and Syria (ISIS), which has been in a state of open warfare with most other Syrian rebel groups. They just mostly don't see ISIS as the primary issue. Many of the most vocal Arab backers of Syria's rebels support what they cast as an Iraqi popular revolution against an Iranian-backed sectarian despot. They equate the Iraqi uprising with the Syrian uprising, as a Sunni revolution against a Shiite tyrant, and actively oppose U.S. or Arab intervention against it. For just one example, the Kuwaiti Islamist preacher Hajjaj al-Ajmi, who has been one of the most prominent fundraisers for Syrian insurgency groups, has urged repeatedly against supporting "the moves by America and Iran to confront the Iraqi revolution."