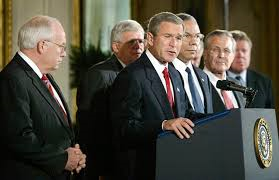 The architects of the Iraq war are back in TV studios and on op-ed pages, as are journalists and pundits who promoted the Bush administration's ultimately bogus case for invading. But Conrad, a former senator who was one of only 23 to vote against authorizing the war in October 2002, hasn't heard from CNN, MSNBC or any other TV outlet. "Not once," he said, when asked if anyone in the press had reached out regarding the current crisis in Iraq.

In an email to The Huffington Post, Conrad, a North Dakota Democrat, offered two possible explanations. The first, he said, is "simply the incompetence of the media." The second is "the shrillness of those trying desperately to rewrite history to cover their own devastating failures."

Despite catastrophic misjudgments -- that Iraq had weapons of mass destruction, that U.S. forces would be greeted as liberators, that the war would pay for itself with oil revenues -- the Iraq war boosters keep getting booked, while those politicians and journalists who were skeptical of the Bush administration's "slam dunk" case for war remain largely on the sidelines.