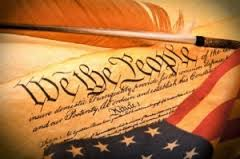 The Fix Was In From The Beginning

; it was only as an afterthought that the Bill of Rights was tacked on, to placate those who were – rightly, as it turns out – suspicious of what Hamilton & Co. were up to.

The Constitution is all about "Congress shall have power…" and so on. Well, over whom shall it have power? By what authority?

True and not true. It all depends on whose point of view, both now and among the founders.

How do you get several independent colonies of brave, independent people to act together to support each other so that they can fight off a superior force? And what if you want to do it while maintaining the rights and freedoms for each man and woman individually, and the individual colonys' rights at the same time? Not an easy task.

People are, in general, not great thinkers. If there is no government, they will fall prey to a united - if partially enslaved - nation like Great Britain. If there is Government, they will fall prey to enslavement by their own Government. It's just a fact of nature. People, in general are not great thinkers.

In hindsight we can see that the Constitution provided for a Government that both, allowed freedom, and created ever increasing slavery. It was a method for protecting the colonies from Great Britain at the time while at the same time attempting to guarantee individual freedom.

Wasn't it Jefferson who suggested that the people should revolt every 20 years or so? But the people are simply stupid enough to not understand that they really need to be doing this. The people are like the proverbial frog in the pot of boiling water.

Many of the people are waking up. They are seeing both the good and the evil in the U.S. Government. Many are on the verge of rebellion, and with good reason.

The answer may not be easy. For now rebellion might be the answer. Or the answer just might be in every individual using the basics of the Constitutions to ward off our own Government. It will be interesting to see how the future unfolds.

Look in the Old Testament, in the book of Daniel. Read Nebuchadnezzar's dream in chapter two. Perhaps we should become part of that Rock Government that became a mountain and filled the whole earth, to have no ending.